Making a Difference with Sclerals

The rapid growth in the use of scleral lenses over the past few years, has meant that many practitioners have now added the option of a scleral lens design to their armoury of lenses to offer prospective wearers.

At Mark Darling’s clinic in Northampton, we have been fortunate in having a close working relationship with a local ophthalmology department and have been receiving regular referrals for scleral lens fitting. This has ensured a continuing and varied supply of patients, which started as a trickle some three years ago and has increased to a steady flow over the intervening period.

This arrangement has helped improve our skill base considerably. Prior to this, opportunities to fit scleral lenses were few and far between, and without this continuity of supply, it was difficult to assimilate the knowledge base that each successive fit contributes towards.

Originally we were using a design that we were both familiar with. The advantage of this is that you become familiar with the parameters of the lens, and the fluorescein patterns and edge clearances to be expected, but with the variety of cases coming through, it soon became clear that limiting ourselves to a single design was limiting our effectivity in achieving satisfactory outcomes for all patients. In my role as Professional Services Consultant for Contamac, I am fortunate in having access to a multitude of designs from our partner labs around the globe and was able to introduce a variety of different designs into the practice.

Whilst most sclerals are a three zone format, consisting of Central, Limbal and Landing zones, there are a multitude of combinations of curves, tangents and peripheral designs that provide for genuine differences between brands.

This was highlighted recently when a Mr SL, a 52 year old was referred to us from the local hospital. He had had a trauma to his left eye some time ago and noticed his vision deteriorating in the right eye. His best corrected VA’s were R 6/12, L 6/24. The full thickness graft in the left eye was off-centre and much larger than normal at approximately 10mm. The original treatment was conducted in the Caribbean after the patient was hit in the face with a soccer ball. Whilst this would not normally result in a rupture of the cornea, during his investigation Mark discovered that the cause of the deterioration in vision in the right eye was probably due to the advancement of undiagnosed keratoconus. Mark presumed therefore, that an existing pronounced cone in the left with associated corneal thinning, was responsible for the ease of rupture and the need for the larger than normal graft. 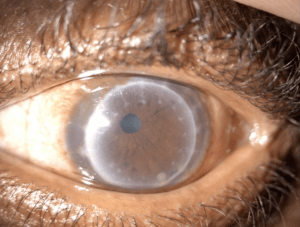 Our first choice lens was a design with a gently sloping limbal zone. This worked well on the right eye, providing good comfort and improved VA to 6/6. It was clear however, that the limbal profile of this design would not accommodate the irregular contours of the peripheral cornea in the left eye. The raised edge of the graft needed to be cleared and its proximity to the limbus called for a much steeper profile than our first choice could offer, even with adjustment. Another design was selected which avoids all limbal touch with higher degrees of clearance. This results in a much steeper limbal profile that our first choice lens.

The first lens barely cleared the graft, the next steeper from the trial set cleared by 367 microns initially and it was decided to allow the patient to wear this, rather than risk any contact with the graft interface.

Mark saw the patient and at one week acuities were R 6/7.5, L 6/12. Wearing time was all day in comfort.  Once settled we intend to reduce central clearance by either reducing the base curve or more likely, using a reverse curve. The excessive clearance at this stage was not causing any issues or fogging, but we feel that some additional improvement in acuity should be possible by reducing central clearance.

The incidence of fogging has become a cause for concern and it has clearly been demonstrated that the problem can be controlled with a more closely aligned fit, but for the novice fitter it is probably better to be on the side of caution as we did with Mr SL above. We are fortunate in having the OCT available in the practice and this gives us a much clearer idea of clearances rather than just relying upon fluorescein. Indeed we are now seeing some of our earlier fits come back through for ongoing aftercare and with the benefit of experience (and the OCT!), we are now aiming to reduce clearances on some of our earlier fits.

Scleral lenses are the hot topic at all conferences around the globe and with the complex array of different conditions and topographies that they can be used with, it is unreasonable for any one design to be suitable for all and it is essential that the practitioner provide themselves with as much choice as possible.

For most of us, scleral fitting did not feature in our college courses, so we are all starting with little experience and have to be guided by lens designers and whatever information we can gain through manufacturer’s workshops and fitting courses. They are a very forgiving mode of wear, no matter how daunting a prospect it might seem initially, the difference you can make to someone like Mr SL returns a level of professional satisfaction unmatched with almost any other type of lens. 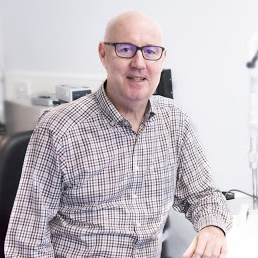 The Effects of Incomplete Surface Wetting