Official Opening Of Our New Facility

On 16th October the Lord-Lieutenant of Essex, Baron John Petre, unveiled a plaque to mark the official opening of Contamac’s new facility in Saffron Walden. 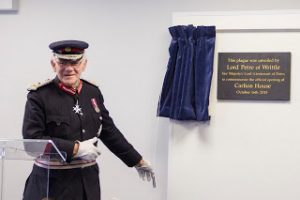 Her Majesty’s Lord-Lieutenants are the representatives of the Crown for each county of the United Kingdom. They were originally appointed in the reign of Henry VIII to take over the military duties of the Sheriff and control the military forces of the Crown. These days they are responsible for organising Royal visits to their county as well as other duties that include the presentation of decorations where the recipient is unable to attend an Investiture. These include the Queens Awards amongst others.

During his address to the 75 members of staff and guests, Lord Petre congratulated the company’s management and staff on the continued growth of the company since Contamac was presented with the Queens Award for Enterprise in 2012.

Both Lord Petre and guests then enjoyed a tour of the 36,000 sq. ft. facility before joining members of staff for an informal lunch at the company’s new headquarters.

Chairman John McGregor thanked management, staff and contractors for their support during the transition and said, ”The new facility represents a multi-million pound investment in state of the art manufacturing and research equipment and includes an ISO 10,000 clean room.
Since moving to the new facility the company has experienced record sales and is now ideally placed to cope with the anticipated growth in demand for Contamac’s current products and planned future developments”.

Contamac has already recruited 15 new members of staff as a result of the move. In particular a 25% increase in Research and Development, which the company sees as key to future growth. The new facility will also allow for production to grow by 50% and come at an ideal time for Contamac to keep pace with current industry trends.