Hybrids – A Softer Option For GPs?

The advantages of a hybrid lens system which combines the crispness of vision associated with a GP lens with the wearing comfort of a soft lens, has been a Holy Grail of contact lens design since the 1970’s. Piggyback combinations were used even then and continue to this day, but the technology to combine both materials in single product has had mixed fortunes.

The earliest patented technology dates back to 1977, when a company called Precision Cosmet acquired technology from Erikson and Neogi, to launch the first true hybrid, the Saturn lens. FDA approval followed in 1984 and in 1986 Sola Barnes–Hind acquired the technology and attempted to address some of the issues associated with the design, namely more movement and limited fitting options. Later the SoftPerm lens arrived with more parameters and more movement, but still suffered from the fact that the materials were the same low water content, and hence low permeability, and had a tendency to separate. The early hybrid designs were very much the last port of call for fitters who had exhausted all other possibilities. Lens adherence and acute red eye further complicated their use and the product was eventually discontinued in 2010. 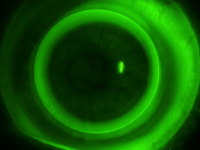 SynergEyes have more recently picked up the gauntlet and successfully marketed a range of products which appear to have solved the problems associated with keeping the two portions of the lens together, although the earlier iterations did still use low water content hydrogels for the skirt and the earlier designs could result in adherence if inexperienced practitioners fitted the vault too high. Later designs are using a silicone hydrogel skirt and a high Dk GP portion, and are now available in a range of modalities, but the practitioner is still limited to the manufacturer’s design, with no scope for practitioners to customise the design.
More recently, a French company LCS, has introduced a hybrid lens design which they call “Eyebrid”. The lens is a combination of Contamac’s Optimum Extra 100Dk material and Definitive 50 silicone hydrogel for the skirt. It too is available in a range of designs under the “Eyebrid” banner. This design goes a long way to solving some of the earlier problems, with movement similar to a soft lens and increased permeability avoiding many of the problems associated with the early products.

For me however, the most significant change that they have offered is to offer the blanks to individual laboratories. This means that a lab can produce their own designs or customise the lens for a practitioner, under their own brand if they wish. I recently had a case where a young keratoconic, who was wearing a keratoconus GP design from a lab in the UK, mentioned that her lenses were slipping off-centre towards the end of the wearing time. Not an uncommon complaint after 10 hours of wear. I had the lens design duplicated but with a standard skirt for trial purposes, and she now wears them in comfort all day, with stable vision due to the excellent centration obtained.

For me this is the big opportunity for these lenses. Many of our GP wearers “tolerate” their lenses because they have no choice but to do so. Practitioners may now be able to offer those patients the same level of vision correction or improvement, with better long-term comfort and without having to go through a complicated and expensive refitting procedure. Labs do not have to spread expensive fitting sets around their customer base. Practitioners can use their existing GP fitting sets to assess the initial fit or simply use the patient’s existing lenses.

I think the acceptance of these lenses into the market has been slightly overshadowed by the recent renaissance of scleral lens fitting, which has filled most journals and this has been a pity. This latest chapter of the hybrid lens story probably offers the most flexible approach to the quest for “the best of both Worlds” that has been around for some time.

Previous Post
The Effect of Corneal Diameter on Soft Lens Fitting
Next Post
Official Opening Of Our New Facility
Menu
This website uses cookies to improve your experience. If you continue to use this site, you agree with it.
Ok