An Insight Into The Apple Lab

The superb range of Contamac IOL materials is the result of years of in-house Research & Development, but the company also takes care to verify its research with independent laboratories. In 2013 Contamac started collaborating with the world-famous Apple Lab in Heidelberg, Germany. In this edition of Global Insight we profile the prestigious centre of IOL research. 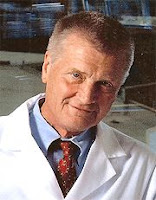 David J. Apple (1941–2011) is affectionately remembered as the official biographer of Sir Harold Ridley, the inventor of the intraocular lens (IOL). As an ophthalmic pathologist, Apple pioneered research into the pathology of IOL complications and became an expert in ocular pathology, cataract surgery, IOL implantation and refractive surgery.

In his later years he was seriously ill and recognised that his age and illness did not leave him much time to conclude his work. He worried about who would continue with it, who would take the relay baton? He wanted to “get back to basics” and provide information and advice to surgeons which he had begun years previously, by reinstituting the study of autopsy eyes. He was concerned that many new lenses and other devices were implanted with no independent research and little oversight. He was distrustful of the marketing of fashionable premium IOLs that appeared to have unfounded claims. It seemed to him that many new lenses and biomaterials came on the market without real proof of safety and efficacy. He had shown throughout the years that careful examination of autopsy eyes could reveal a truth about how the implant works. He would say “These findings do not lie and cannot be spun”.

In the early 1980s David Apple had just started working as a general ocular pathologist, when one of the first specimens he received was an enucleated eye. It contained an early J-loop Posterior Chamber IOL. Prior to explantation the eye had become blind because of IOL-related complications. The specimen was labeled IOL No. 1 and it marked a starting point in the field of IOL pathology.

A report on IOL No. 1 was submitted to the Ophthalmology Journal. Given the usual waiting list for papers to be published, Apple was surprised when the editors promptly accepted his one. He learned later that they did so because they were strongly anti-IOL, as were many in the ophthalmic establishment at this time. The editors hoped the paper might signal the beginning of the end for IOLs.

But surgeons read the account with interest. The results were helpful to them in recognising the pathology of IOL complications. In the first 30 years after Ridley invented the implant, there was a poor uptake in using IOLs, as surgeons would struggle to achieve good results when inserting lenses through large-incisions, without the instruments, lighting and microscopes that we have today. But the main reason for the delay in the use of IOLs was the antagonism held by many eye surgeons toward Ridley and his “radical” new invention. The prevailing dogma was that it was dangerous to implant a “foreign body” permanently into the eye.

Today cataract surgery with IOL implantation is a very successful procedure. Advances in the use and application of new instrumentation, operating microscopes and phacoemulsification, contributed to this success, but so did the work of David Apple and his colleagues. His research focused on avoiding complications by improving IOL design and the choice of materials. At the start of the 1980s materials such as Nylon and Polypropylene were used to make IOL haptics because they were very flexible – something the surgeon desired for manipulating a lens within the confines of the eye. However the autopsy eyes with these lenses told a different story – the materials had poor “memory”. The lens lost its shape once implanted and moved inside the eye.  The pathology results correlated well with the medical history, patients’ symptoms of perceptible lens decentration, inflammation and other complications. Clearly what was advantageous to the surgeon at the time of surgery (flexible haptics) was over time, likely to be a danger to the patient. The industry listened to Apple and by the end of the decade most lenses were made as single-piece PMMA lenses – lathe-cut or moulded from one piece of PMMA a material which had better “memory” over time once in the eye.

Today the Apple Lab remains an official Collaborating Center of the World Health Organisation’s Prevention of Blindness Programme. David Apple’s meeting in 1990 with the WHO, eventually proved instrumental in providing information to them on the best type of IOL to be used in cataract surgery in developing countries

Training physicians and assistant personnel is an important part of the work in the laboratory. The Apple Lab offers workshops and continuing education for different subject areas in the form of internal and external events. IOL surgery can be replicated with a virtual-reality surgery simulator (Eyesi). In this way, routine surgeries and complex situations can be trained repeatedly – without risks for doctor or patient.

This follows a long tradition, as over three decades Prof. Apple trained more than 200 students and doctors who visited his laboratory, and many of the “students” are now in senior positions in ophthalmic education and private practice.  One of the “Apple Korps”, as Apple called them, is Gerd Auffarth, who in the 1990s he spent two years as a research fellow in Charleston learning from the pioneer in IOL pathology. Today Prof. Dr. med Gerd Auffarth is Chairman of the Eye Department at Heidelberg University and Head of the Apple Lab there.

When Prof. Apple died in 2011, his laboratory was located in Sullivan’s Island, South Carolina, but Gerd Auffarth sought permission from David Apple’s widow to perpetuate the Lab’s work at a more international level by re-locating it to Heidelberg. In the spring of 2012 the dream came true and the laboratory was shipped to Germany.

“Heidelberg is a most appropriate new location for the laboratory” Prof. Auffarth explains, “David admired the city and its university, and often visited here. Equal to his love of medical science, David revered the history of medicine. At over 600 years of age, our Medical Faculty is the oldest in Germany.“

The Apple Lab provides an independent service to surgeons and industry, specializing in optical, physical, chemical and other analyses on ophthalmic devices.

The Apple Lab works hand-in-glove with Clinical Researchers at the University of Heidelberg and this is an ideal situation where a new lens design using a new material, is first tested in the Apple Lab and then in Clinical Research on Ethics Committee approved clinical trials on patients. Thus IOLs are studied at all stages of the product life-cycle and in many cases implants are examined before they are launched on the market, after which this is followed-up with vigilance studies on the device performance after it is marketed.

This post-market surveillance analysis continues the work that David Apple began 35 years ago. Explanted IOLs are sent to the laboratory to provide surgeons and IOL manufacturers with a report on the structural and ultrastructural analysis of the lens.

The explants are examined to identify changed morphology (lesions, inclusions, discolourations, etc.) and locate opacifications, whether these are in central, peripheral, superficial, cortical or pervasive positions, in or on the device. This produces a photographic record before the lenses go through Histological Staining and scanning electron microscopy (SEM) at different levels of magnification, and EDX (energy dispersive x-ray fluorescence) spectroscopy, all which helps to identify the chemical cause of an opacification.

In Heidelberg, Apple’s successors created a new database of IOL results, building on the studies conducted by him in the 1980s. The laboratory database has records of over 25,000 explanted IOL records and research IOLs – the number is growing rapidly.

But there is also new work being done in Heidelberg, as the Apple Lab has established links to centres of excellence in and around Heidelberg. Worth mentioning here is a unique collaboration with the University’s Applied Mathematics Department, where a joint research group aims to create mathematical models and simulations, to predict the efficacy and safety of IOLs over time.

“This is a new field, predicting the stability of IOL materials and designs many years after implantation” said Prof Auffarth. ”We are just at the beginning, but think about how important it would be if we could say that an IOL will keep its stability in the capsule over 5, 10, 15 years or more, or that an IOL biomaterial will be just as optically pure twenty years after implantation as the day it was implanted. It is especially important when you think of paediatric cataract extraction with IOL implantation. As a surgeon, I’m implanting a lens that should stay in the infant’s eye for many years – maybe for the rest of the child’s life“.

Contamac’s Simon Wyatt said “The Apple Lab brings together ophthalmic device manufacturers and ophthalmic surgeons from all over the world. Contamac is proudly sponsoring not only research on its own materials, but our contribution helped fund a research fellow from South Korea who worked in the lab last year and two research fellows from China who will work during 2016. The work they do typically confirms our own in-house results. But it is interesting when they spot a divergence from our results, as that can help us improve our material or we can make specific recommendations to IOL manufacturers on how the material should be handled during manufacture.”